An important stage in the expansive vision of the Society’s Founder, Geshe Acharya Thubten Loden, was realised in 2000 with the completion of the traditional holy Tibetan temple, the first of its kind in the southern hemisphere. An extraordinary honour was bestowed on the Tibetan Buddhist Society when the Great Treasure of the World, Hist Holiness the XIVth Dalai Lama the temple on 23 May 2002, describing it as a place for study and practice of the rich Buddhist philosophy, prayers and meditations. Weekly Path to Enlightenment, Yamanta and Vajrayogini classes are held in the temple. With its 18-foot tall golden Shakyamuni Buddha statue, hand sculpted decorations, paintings and auspicious symbols, the traditional Tibetan temple is a Melbourne landmark and the main venue for the Society’s teaching programme. Tours are conducted throughout the Tibetan New Year Festival, Buddhist Spring Festival and Rose Garden Open Weekends. 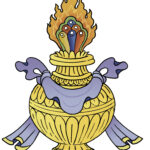 Of the 7.3265 trillion images crossing our mind on an average day in samsara, there is one with a special place. It comes as we enter the Tibetan Buddhist Society and walk the winding way by lake, lawns, flowers and trees. As we walk there is a softening of samsara. The West Bank, the brutality of Baghdad, Canberra’s conambulations, the constant emotional tug of family and finance: all begin to subside. As the clamour of the cricket and the ferment of the football fade to the background of mind, we look up to the beautiful image of our Temple, our sacred space. The associations of our traditional Tibetan temple begin to open their network of dependent arisings. Here is the place of our Dharma teaching, the environment within which we make most meaningful contact with our Guru, seated in stillness, listening to his Dharma. We receive his blessing and empowerment here, and stay with him in retreat. Shakyamuni Buddha towers above, a statue filled with the blessing of vajra body, speech and mind. In surround are forty-seven images of enlightenment, silk thangkas in sets of the two supreme masters and seven sage ornaments, as well as Manjushri, Maitreya, White Tara and so forth. The temple, and the statues and thangkas that he has brought to it, are Geshe Acharya Thubten Loden’s vision made manifest, his offering to the Australian people. The image we have of our temple is therefore not just that of a building, but of a special environment, a sacred space, and an especially potent symbol of the Dharma. The gold painting of the roof and porch, the Dharmachakra, deer, victory banners, spires and lotus petals, and the decorative painting are all reminders of the Dharma. They are found in the traditional Tibetan temples of India and Tibet. As we approach the temple from the front, the symbolic features strike us immediately. Over the front entrance to the temple is a Dharmachakra flanked by two deer representing compassion and peacefulness. The deer gaze up at the Dharmachakra symbolising the aspiration for the Dharma. The Dharmachakra, or the wheel of Dharma, represents the three turnings of the wheel of the Dharma by Shakyamuni Buddha. Such is the Dharma wheel, which destroys all obscurations: the obscurations to liberation and the obscurations to omniscience. As we observe the building we notice that around the parapet are golden disc-like ornaments each of which is a representation of one of the Eight Symbols of Good Fortune and the Five Qualities of Enjoyment. As we enter the temple we are enthralled by the huge golden Buddha statue. The statue holds the script of over six million mantras rolled and positioned in the prescribed places within it, as well as the holy relics from His Holiness the Dalai Lama placed at the heart and crown. The statue positioned on the altar and lion throne stands 18 feet high. It is made of copper and painted with gold. The hair treasure is a blue topaz. The majority of the relics was given to Geshe Loden by His Holiness the Dalai Lama and includes a small Thirteen Deity Yamantaka statue, five Shakyamuni Buddha relic pills, hair relics from the progression of reincarnations of the Dalai Lamas, and a tsa tsa collecting all blessings. The temple is now blessed by the presence of the Tibetan canon of the Translated Word (Kagyur) and Translated Commentaries (Tengyur).The translated word is the texts of the collected sutra and tantra teachings of Shakyamuni Buddha and can be considered to represent the Buddha’s holy speech. The Translated Commentaries are the collected works of the great Indian Pandits, such as Nagarjuna, Asanga, Chandrakirti and so forth. Our temple then is a beautiful dependent arising, of design, craftsmanship, symbolism, Buddha image, thangkas, the Buddha’s Word, and the vision of our spiritual leader. It is our place of Dharma, of teachings, empowerments, blessings, tantric pujas and retreats. It holds the hope of enlightenment, the welfare of beings, and extends the opportunity of truth to all who would hear. Unique in a world of turmoil, precious image in our minds, it is our sacred space. 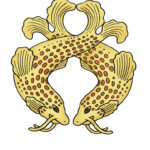 The symbolic features of the temple

Over the front entrance to the temple is the symbol traditionally seen on all Tibetan monasteries. It is a Dharmachakra flanked by two deer. The deer are a peaceful animal considered to represent compassion and peacefulness. One is male and the other female, indicating harmony, happiness and fidelity. The particular deer on our temple have a single horn and are known as the Tibetan unicorn. It is a magical deer which only manifests in the presence of great teachers. The deer gaze up at the Dharmachakra symbolising the aspiration for the Dharma. The Dharmachakra, or the wheel of Dharma, represents the three turnings of the wheel of the Dharma by Shakyamuni Buddha. Its three major parts – hub, rim and spokes – represent the three higher trainings, the path to liberation from samsara. The hub is for higher training in ethics, the rim for higher training in concentration and the spokes for higher training in analytical wisdom. The eight spokes point in the eight directions and represent the Buddha’s noble eightfold path: 1: Right understanding 2: Right thought 3: Right speech 4: Right action 5: Right livelihood 6: Right effort 7: Right mindfulness 8: Right concentration. The Dharma wheel destroys all obscurations: the obscurations to liberation and the obscurations to omniscience. Around the parapet of the building are golden disc-like ornaments each of which is a representation of one of the Eight Symbols of Good Fortune and the Five Qualities of Enjoyment. These again are seen on all traditional Tibetan meditation halls. 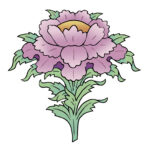 The Eight Symbols of Good Fortune 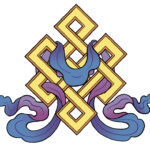 The Symbols of the Five Qualities of Enjoyment

There are two additional symbols: 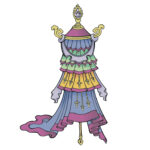 In the main hall seventy-five candle-like offering lights span the altar beneath the statue so that people can accumulate merit by sponsoring the lights. Making such light offerings is the cause of achieving the divine eye, one of the six clairvoyances. The six clairvoyances are explained in Nagarjuna’s Precious Garland of Advice to a King as: (1) the divine eye, (2) the divine ear, (3) knowledge of others’ minds, (4) magical emanations, (5) memory of former lives, and (6) knowledge of the extinction of contaminations. The definition of the clairvoyant divine eye is a clairvoyance directly perceiving the subtle and gross forms of various realms and which arises depending on a divine eye as its dominant condition. Nagarjuna outlined the individual projecting causes for the attainment of the clairvoyant divine eye in his Precious Garland of Advice to a King

By offering a chain of lamps at reliquaries,
And lamps in dark places,
And oil (electricity) for lamps as well,
You will attain the divine eye.

(A full explanation of the various clairvoyances and the means to attain them is contained in Geshe-la’s  Fundamental Potential for Enlightenment). 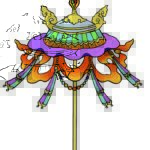 Offering to holy Buddha statues is considered equivalent to offering to the Buddha himself and its blessing like that of the Buddha. So the most important part of the temple is the huge golden Buddha statue. It was constructed in Nepal by one of the world’s most skilled craftsmen of Buddhist iconography, Shakya Devaraj. Over two days, with the participation the teachers and directors of the Tibetan Buddhist Society throughout Australia, the statue and statue substances were blessed by an assembly of monks and students. The statue was then pieced together, the script of over six million mantras rolled and positioned in the prescribed places within the statue, and the holy relics from His Holiness the Dalai Lama placed at the heart and crown. Geshe Acharya Thubten Loden and the assembled monks then performed a consecration. All this to help create a tangible presence of the Buddha embodied in the beautiful statue. The statue is itself 11 feet tall, and positioned on the altar and lion throne stands 18 feet high. It is made of copper and painted with gold. The hair treasure is a blue topaz. The statue, gold paint, blue topaz, mantras and shipping together cost $60,000. The Buddha statue is filled with relics, mantras and a variety of precious substances. The majority of these were given to Geshe-la by His Holiness the Dalai Lama and include a small Thirteen Deity Yamantaka statue, five Shakyamuni Buddha relic pills, hair relics from the progression of reincarnations of the Dalai Lamas, and a tsa tsa collecting all blessings. 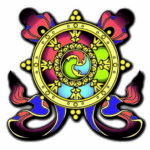 The Blessing Mantras Positioned Inside the Statue Include

The Precious Substances Packed Inside the Statue Include

The Peaceful Land of Joy Gardens

These beautiful 10-acre gardens were created as a haven to create happiness and tranquillity for all who experience its environs. With hundreds of rose bushes in 400 varieties, this garden is home to one of Victoria’s largest and most successful examples of rose companion planting and organic gardening. The gardens were continuously nurtured and expanded by volunteers under the careful guidance of the Society’s Founder, the Venerable Geshe Acharya Thubten Loden, until his passing in August 2011. As a refugee from Tibet who first came to Australia in 1976, Geshe Loden said the gardens and the Society’s traditional Tibetan temple reflected his gratitude for the support and shelter he had received in Australia over the past 29 years. With lakes, sweeping lawns, sunny courtyards and 2500 trees there are 38 golden robinias, 23 Californian redwoods, 31 olives, weeping elms, willows and mulberries, cedars, Japanese maples, flowering cherries and blue spruce. The Society’s 10-acre garden with hundreds of rose bushes in many varieties is a gift to the community – an environment created to generate true enjoyment. This is an opportunity to experience the tranquillity and uplifting atmosphere of one of Melbourne’s most beautiful gardens. Sitting by the lake watching the bird life, relaxing under a tree and admiring the roses around the traditional Tibetan temple can help visitors recharge and develop a calm approach to the challenges of a busy life. Rose enthusiasts can learn about organic rose cultivation and take one of the regular free tours with our resident tour guides. During the two annual Rose Garden Open Day weekends in spring and autumn delicious Devonshire teas are served in the outdoor café, offering homemade scones with jam and cream, savoury scones and cakes and the Tibetan Buddhist Society’s special blend of Chai tea.

The temple is open on Sundays from 3-4 pm during school terms and other times by appointment. Please contact the centre on (03) 9333 1770 for temple appointments.

Register for newsletter and other emails here 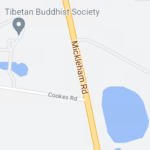